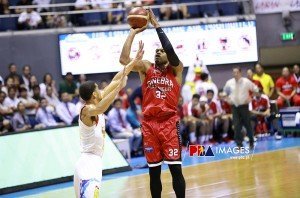 Brownlee was invited to come over by his mother club mentor Tim Cone, who perhaps needed extra bodies for the said practice session in preparation for the 2019 SEA Games.

After the game, Brownlee told ABS-CBN News’ Camille Naredo about how he felt joining the national team even if it is just for practice.

“Everybody had a great attitude. Of course, we’re not competing against each other here. Everybody’s just trying to make each other and just being very positive,” he also said.

There has long been talks for Brownlee to become Gilas’ next naturalized option. There’s already a bill filed to hand the charismatic import his citizenship.

Throughout the years, Brownlee has developed a good relationship with the country, even representing Alab Pilipinas and Mighty Sports.