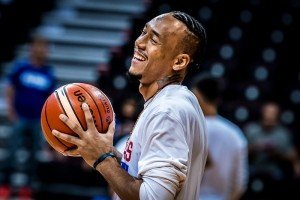 Speaking to EPSN5’s Richard Dy, Marcial noted that he has acknowledged Abueva’s apology but the 6-foot-4 forward will still have to accomplish a certain list of things Marcial has handed out.

“What he did was good. We have been talking, but the process (of lifting the suspension) is still long,” Marcial said Sunday night.

Marcial didn’t give any timeline on Abueva’s return to the court, stressing that everything depends on how compliant the Phoenix veteran will be.

“If he’ll be able to do what we talked about, and I gave him a list of things to do, if he can do all those, then we’ll talk again,” he added.

Lifting of the suspension is not automatic once Abueva has accomplished the tasks, but Marcial did say there will be another dialogue.

Abueva was suspended indefinitely after a clothesline of then TNT KaTropa import Terrence Jones during an elimination round meeting in the Commissioner’s Cup.

NBA: James among US athletes outraged at black man’s death