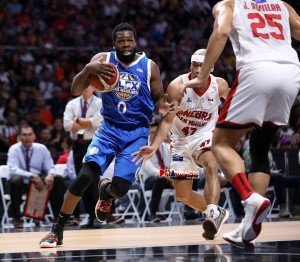 Departing NLEX Road Warriors import Olu Ashaolu took time to thank the franchise for giving him an opportunity like no other.
In a note he published via the NLEX Facebook page, Ashaolu noted that he had a great time playing for the Road Warriors.

“I enjoyed my time with NLEX. A great team atmosphere where everyone came in to work and get better each day. I had many firsts with this organization: first time traveling to Macau, to Dubai. I enjoyed my time here,” he noted.

“The fan support in the Philippines is insane. I’ve never been to a country where everyone is aware of what’s going on in the basketball circle. Best fan base of anywhere I’ve ever played!”

In spite of the Road Warriors having a strong 4-1 record in the PBA Governors’ Cup, the squad decided to replace Ashaolu with Manny Harris, who has been to NBA teams.

But even if Ashaolu got replaced, the 6-foot-5 big has no hard feelings for the Road Warriors. He even said that he believes NLEX can get the job done this conference.

“Moving to a different league? All part of the business. I’m gonna continue to play throughout Asia. I’ve been in Asia the majority of my career so I don’t plan on leaving. If I ever got the chance to return to the PBA, I definitely would. The PBA is a great league to compete in,” he added.

“I have no doubt these guys will continue to fight and surpass people’s expectations. They’re a resilient group of guys—I would tell them to go finish the job we started!”