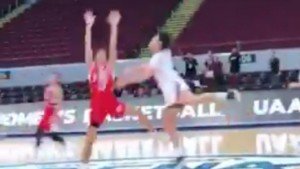 Following a miss from the UE Lady Warriors, veteran forward Pesky Pesquera grabbed the rebound, looked at the clock, and wisely made a long attempt from behind the halfcourt line.

UP Lady Maroons defeated UE Lady Warriors 55-52 via a half court buzzer beater of Pesky Pesquera.

The game was tied at 52-all prior to the remarkable shot, so either way, a miss would only mean overtime for both sides.

But if there is one thing we learned from Pesquera’s shot, it’s that the game isn’t over until the final buzzer.

It was the Lady Maroons’ 1st win in 3 seasons too.