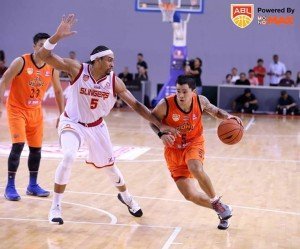 New San Miguel Alab Pilipinas point guard Jason Brickman says he is happy that he will finally be able to play for the Philippines in the upcoming ASEAN Basketball League 2019-2020 season.

In a video posted by Inquirer Sports on Twitter, Brickman said he looks forward to playing in front of the home fans and also learning from Alab head coach Jimmy Alapag, a legendary Filipino point guard himself.

“Playing for the Philippines, playing for coach Jimmy, it’s going to be a great season for us,” said Brickman.

Brickman added that they have been in touch throughout the years with Alab and he just feels grateful to be able to finally fix papers and make the signing happen.

“I’ve been trying to play here in the Philippines for a while now. I’ve been in contact (with them) for years. We just haven’t, you know, been able to get it (done) together,” he said.

The former Mono Vampire playmaker will join the likes of Jeremiah Gray, Brandon Rosser, and Lawrence Domingo as the Filipino club tries to regain supremacy in the premier regional professional tournament in Southeast Asia.