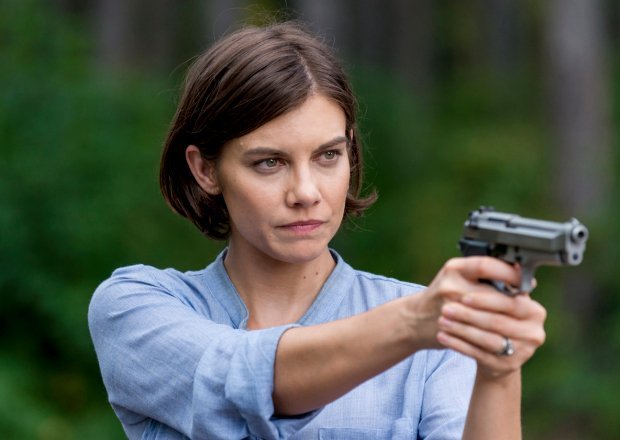 Lauren Cohan is going back to The Walking Dead season 11 as Maggie Green and AMC announced it has renewed the show ahead of the premiere of season 10. The actress left the series in 2018 following the death of the father of her baby (played by Steven Yeun) in the series but she’s returning next season with a potential new love interest.

A new character in The Walking Dead season 10 named Dante (played by Juan Javier Cardenas) who falls in love with Cohan’s character in the comic book version. Producers may be setting up the same storyline with Maggie’s comeback.

Cohan left the series in 2018 to star in Whisky Cavalier, a show on ABC with Scott Foley. The network, however, canceled the program after one season. Below is the full press release of the confirmation of The Walking Dead season 11 and Cohan’s return.

Today, in front of more than five thousand New York Comic Con fans, AMC confirmed the renewal of The Walking Dead for an eleventh season and the return of Lauren Cohan, who plays fan favorite character Maggie Greene, as a season 11 series regular. The Walking Dead executive producers Scott M. Gimple and Angela Kang announced the news at the show’s annual NYCC panel, surprising fans by bringing out Cohan to join the show’s executive producers and cast on stage. The series’ renewal comes one day ahead of the show’s season 10 premiere on Sunday, October 6 at 9pm/8c.

Over ten seasons, The Walking Dead remains the highest-rated series on ad-supported cable television and has given life to an expanding Universe that now includes the companion series Fear the Walking Dead, a new third series from Chief Content Officer Scott M. Gimple and TWD veteran writer and producer Matt Negrete, as well as an untitled The Walking Dead Movie, starring Andrew Lincoln, with Universal and Skybound Entertainment.

“The Walking Dead burst out of the gate ten years ago as a genre show that had all the character depth of a top-tier prestige drama,” said Sarah Barnett, President of AMC Networks Entertainment Group & AMC Studios. “And now ten years later – led by the brilliant Angela Kang and fueled by one of the most consistently talented casts in television – this phenomenon is flourishing creatively, with critics and audiences embracing its reset. We’re delighted to welcome back Lauren Cohan, she has meant so much to this show and its passionate, global fanbase, who are in for a fantastic ride over the coming months.”