Gilas Pilipinas: Tenorio not thinking about sure gold in SEA Games 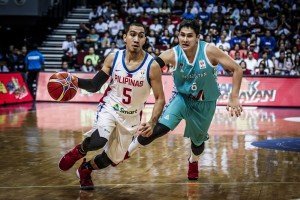 Gilas Pilipinas point guard LA Tenorio says he does not see a surefire gold medal finish for the nationals in the upcoming Southeast Asian Games, adding that the Philippines should not think about such thoughts.
Speaking to Inquirer.net’s Mark Giongco, Tenorio said he is wary of upsets in the regional meet, considering Gilas’ ASEAN counterparts have improved throughout the years.

“I don’t think it’s a sure gold right away. We don’t think of that because we might get caught off guard and we end up stumbling if we don’t look at what’s in front of us so we’re ready for this and we have to be ready for this.”

Tenorio was part of Gilas players who suited up throughout the 2017 to 2019 FIBA World Cup Asian Qualifiers. He was also a part of the 2014 World Cup Philippine team.

“It’s the same because we’re [wearing] the Pilipinas jersey,” said Tenorio, per Inquirer.net.

“It’s pretty much the same how you will prepare. Doesn’t matter which team we’re going to face whether it’s Korea or Thailand or Italy, Serbia, Malaysia or Singapore. Doesn’t matter. You’re carrying the Pilipinas name and you have to prepare really hard. Nothing is guaranteed here.”

Tenorio is among 15 players selected for the Gilas pool for the SEA Games, mentored by head coach Tim Cone.