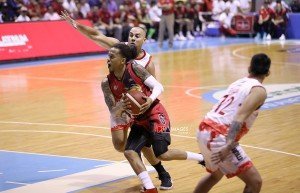 San Miguel Beermen guard Chris Ross admitted that being at Gilas Pilipinas practice for the 1st time gave him a feeling he does not always experience in his basketball career.

Ross told Mark Giongco of Inquirer.net that merely driving to Gilas’ once-a-week practices gave him “butterflies in the stomach” and that the feeling of being part of the national team pool for the upcoming Southeast Asian Games 2019 does not even compare to a PBA Finals Game 7 which he as experienced a couple of times.

Ross is a first-time national team member; due to his eligibility issues, the Beermen stalwart has not been selected numerous times for FIBA competitions. But because the SEA Games have a different set of rules for eligibility, Ross finally was able to get his shot.

The 2-time Defensive Player of the Year also said he likes the composition of the team, which is composed mainly of Barangay Ginebra stalwarts and his teammates with the Beermen.

“There’s a lot of experience in here … I feel like we could (possibly) be one of the better national teams that have been put together,” said Ross per Inquirer.net.

The Philippines will host the SEA Games which begins on November 30 this year. Basketball games for the 5-on-5 sport will be held at the Mall of Asia Arena.