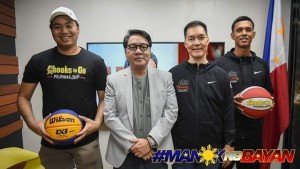 Chooks-to-Go Pilipinas 3×3’s Ronald Mascarinas said he felt sad upon hearing that the national 3×3 basketball team pool for the upcoming 2019 SEA Games will be composed of PBA players, and not players from the Chooks’ 3×3 stable.

“Personally, I’m sad for the players because I know they are expecting to represent the country and they’ve sacrificed a lot for this spot,” said Mascarinas in a statement. “It is their pride and honor to serve the country.”

Mascarinas though, said he respects the decision of the Samahang Basketbol ng Pilipinas (SBP) and is even offering the PBA players to join Chooks 3×3 tournaments to help them prepare for the SEA Games 3×3 competitions.

The Chooks big boss also stated that he will continue shooting for the ultimate dream of the 3×3 league to help the Philippines qualify for the Olympics.

“But it should not distract us from our ultimate objective, which is to qualify in the 2020 Tokyo Olympics.”

The Chooks 3×3 stable includes some of the Top 100 3×3 players in the country like Joshua Munzon, Karl Dehesa, and Alvin Pasaol.

The 3×3 basketball variant will be played in the SEA Games for the 1st time, and shall be hosted at the Filoil Flying V Centre.