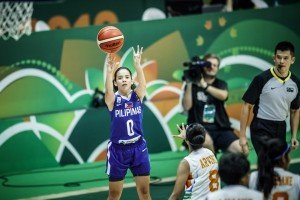 Gilas Pilipinas Women’s 3-point shooting clicked when it mattered most as they pulled away late to beat host nation India, 92-78 in the 2019 FIBA Women’s Asia Cup Saturday in Bengaluru.
Sharpshooters Khate Castillo and Janine Pontejos combined for 9 triples as the Philippines shot 44.8% from deep for a decisive victory which allowed the country to remain in Division A of the continental meet.

Pontejos topscored with 18 points, while Castillo added 15 on an impressive 5/6 shooting from long range. Four others finished in double-digits for the Filipinas with Ria Nabalan adding 13 markers.

The Philippines had a strong start, putting 28 points to go up by 12 after the 1st quarter.

But the hosts were not to be outdone, cutting the deficit in half after the middle 2 quarters.

That was when the Philippines pulled away, continuing to hit it from the outside to establish a 20-point cushion, 92-72 late in the 4th.

Shireen Vijay Limaye poured in a game-high 23 points for India, who have been relegated to Division B.

Coach Patrick Aquino’s wards out-rebounded their counterparts, 51-39, and also had 37 assists and 16 steals throughout the back and forth contest.

NBA: Divac steps down as Kings GM, Dumar takes over

NBA playoffs: Blazers twice-to-beat vs Grizzlies in first-ever play-in round