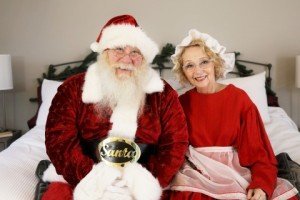 Sleep Number announced today that it is the official bed of Santa and Mrs. Claus. As the famous song tells us – “He sees you when you’re sleeping, he knows when you’re awake” – Santa has been looking out for sleepers for many years. Now Sleep Number is making it possible for people around the world to keep an eye on how the man-with-the-bag and Mrs. Claus are sleeping.

“Getting great sleep is one way I can not only make my lists, but also check them twice,” said Santa Claus. “Now, Mrs. Claus and I can both get the quality sleep we need as we snuggle in for a long winter’s nap. And, considering all the visions of dancing sugar plums I’ve been having, I may just have to re-name one of the reindeers Dreamer.”

While his bundle of toys brings joy to children all over the world, the long hours in the workshop spent filling his bag were taking their toll on Santa. This holiday season, the Sleep Number® bed offers the famous couple much needed rest and recovery as they gear up for their busiest time of the year.

Using their Sleep Number 360™ smart bed’s SleepIQ® technology, Santa and Mrs. Claus have learned how to get the most out of their sleep, and want to share those insights with families during the busy holidays. Keep up with the Clauses as they prepare for the big night at https://www.sleepnumber.com/santawatch. How does Mrs. Claus deal with Santa’s snoring? Or, how has Mrs. Claus’ nighttime meditation helped her racing mind? Each day, visitors get a glimpse inside their life at the North Pole, including the couple’s sleeping habits, their Sleep Number® settings, and what’s at the top of their lists this year.

“For years, I woke up early to see what gifts the jolly old elf put into my stocking, and now I am honored to gift him and Mrs. Claus a good night of sleep,” said Kevin Brown, chief marketing officer at Sleep Number. “Whether it’s driving a sleigh full of toys, or spending late nights tinkering in his workshop, better sleep is just what Santa needs to perform at his jolliest.”

While we know Santa has late nights in the workshop, many of us see our sleep impacted during the holiday season. According to Sleep Number’s 2017 holiday sleep survey, which polled more than 1,000 men and women across the U.S. ages 18 years and older:

Santa added, “And remember, if you want to end up on my ‘nice list,’ make sure you’re getting quality shut-eye… I’m always watching!” (Business Wire)

The Pandemic Effect: Attacks against remote access protocols continue to rise over the past year

What Lifestyle Should Our Elders Have to Keep Them In Shape?